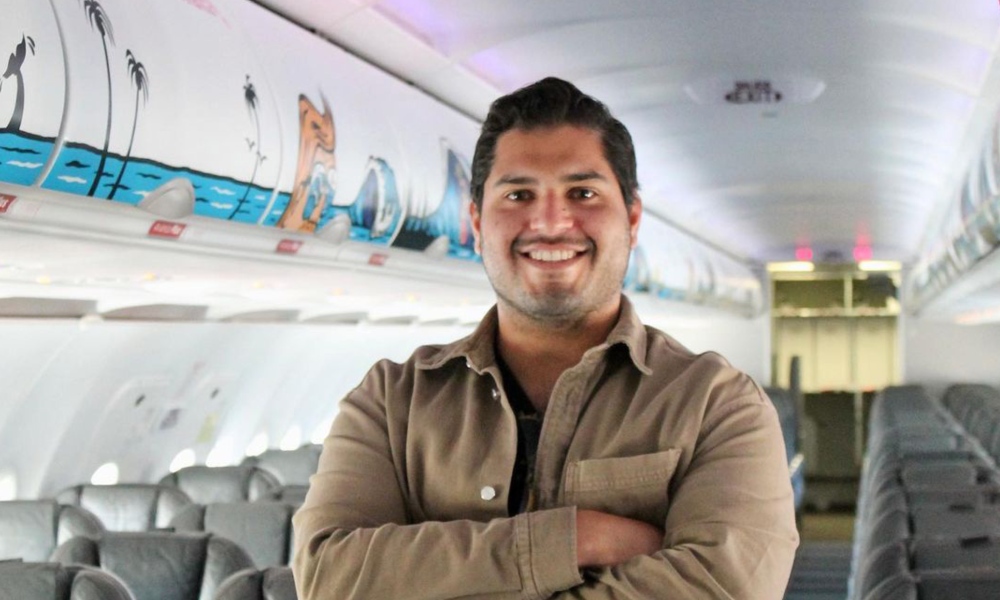 We spoke to Armando to learn more about his art and how he captured the essence of Salvadoran specialty coffee in his illustration. Read on to learn more!

Armando’s journey began in Santa Ana, El Salvador, where he first picked up his passion for art after spending plenty of time among the city’s surfing and skateboarding communities. However, his career officially began in Buenos Aires, Argentina in 2016, when he graduated from art school.

“[Not too long after,] I had the honor of being invited to participate in various events where I was surrounded by many artists from different disciplines,” he tells us. “Among the events were music festivals like Lollapalooza and Corona Capital Festival.”

At the end of 2017, Armando designed his first surfboard and snowboard for Californian brand Quiksilver, and in 2018, he returned to El Salvador to focus on capturing the people, fauna, flora, and culture of the country in his art.

Since then, he’s worked for a range of both national and global brands. Today, his style blends a passion for surfing, skateboarding, and photography, with a love for El Salvador.

“Salvadoran coffee is perfect and our high standards for coffee put us among the best in the world,” Armando explains. “I love our varieties of coffee and I love that we identify with our land and the people who work on it.”

Since being introduced to the work of Mario Salinas at Pirómano Coffee Roasters – an Official Ambassador for PRF El Salvador – Armando says he hasn’t stopped learning about specialty coffee.

For his PRF El Salvador illustration, he drew on both this day-to-day relationship with specialty coffee and one of Salvadoran coffee’s most famous exports: Pacamara.

“Coffee is the fuel for many artists and creatives – without coffee, I couldn’t work! I can’t start illustrating in the morning without a good cup on my drawing table.”

He adds that although it was initially difficult to incorporate Pacamara cherries into the design, he played around until the piece came together.

“Creating this illustration for PRF was fun because I like challenges and getting out of my comfort zone.

“The process of ideas and conceptualization is what makes an illustration or a work of art rich. We worked hand-in-hand as a team and we managed to capture the essence of Pacamara, keeping true to its roots.”

PRF El Salvador will take place March 16 and 17 at the Salamanca Exhibition Center in San Salvador. Dozens of exhibitors, lectures, panel discussions, and workshops are already confirmed, and thousands of coffee producers as well as other international professionals are expected to attend.

This is your chance to own a piece of PRF history – get your limited edition merchandise before it sells out.
To learn more about the event, email our team here or check out our list of confirmed speakers in this article. You can also read more about workshops and cupping sessions at PRF El Salvador here.

Exclusive PRF merch launch with artist Armando Márquez
By using this website, you agree to our use of cookies. We use cookies to provide you with a great experience and to help our website run effectively.
OK
Manage consent